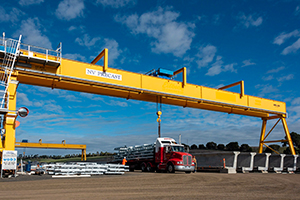 The Victorian Government’s Level Crossing Removal Project is set to reshape the urban design and transport connectivity of the state. While the long-term benefits of the project are largely uncontested, construction is disrupting the morning commute.

To calm the public and reduce construction time, the state government is recognising the benefits of precast manufacturing. This realisation is illustrated in the government’s decision to use precast concrete L-beams as part of level crossing replacement elevated rail.

Mr. Kleinitz says the L-beams function much like a viaduct when they are installed.

“Trains run through the U-shaped viaducts once ballast and track is laid, which fast-tracks project completion,” he says.

NVC owns and operates its own precast manufacturing yard, which Mr. Kleinitz says enables them to offer a range of economic options, while still maintaining strict quality assurance.

Government’s interest in precast concrete is being mirrored throughout the civil infrastructure industry.

“The rise in precast is largely due to site constraints, tightening budgets and a wider understanding of economy of scale potential.”

He adds it was this shifting climate that inspired the company’s recent decision to re-brand.

“We used to go by the name North-Vic Constructions, but recently changed that to NVC Precast,” Mr. Kleinitz says.

“We chose the name because it recognises the significant investment the company has made in precast capabilities.”

Mr. Kleinitz says precast has allowed the company to grow to level where it can manufacture and supply elements to contractors on major infrastructure projects throughout southeast Australia.

“NVC began operations as a small family-run business competing for bridge design and construction projects in 1989,” he says.

“The core business consisted of predetermined municipal and government tenders, with subcontracted roadworks and ancillary works.”

He says NVC can now provide a total package of services including the design and construction of T-beams, planks, L-beams, PSRC piles, headstocks, columns, large service pits and other items suitable for precasting.

“We have grown organically in parallel with the expertise of our people and consultants, allowing the company to take on a number of large contracts – mostly completed in-house – with a specialisation in precast,” Mr. Kleinitz says.

“We are continually reviewing techniques and best practice in our fields.”