Precasting with a purpose: NVC Precast

Precasting with a purpose: NVC Precast

For NVC Precast, meeting the appetite of the civil infrastructure market for precast elements is the main goal. Building a momentum for internal growth and technological development has helped grow the company to where it is today. 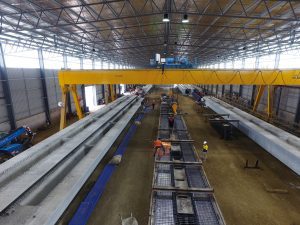 Since its foundation in 1989, when it was known as North-Vic Constructions, NVC Precast has grown to be recognised as prestressed and precast concrete specialists, across both Victoria’s and New South Wales’ civil construction industries. As Steve Reilly, General Manager Construction and Engineering at NVC Precast recalls, the company’s early days under the direction of Managing Director Dan Kleinitz laid the groundwork for it to become a major player within the precast market.

“When North-Vic Constructions started, it was a small construction company specialising in piling and bridge construction. Dan has slowly grown the business, with particularly rapid growth within the last five to ten years,” he says. A turning point in the development of the company was when NVC decided to start making their own prestressed beams, which required significant investment into the infrastructure of the yard, Reilly adds. This investment substantially increased NVC Precast’s production capabilities, he says. “I would say that was one of the key boosters for the business, as we started to grow and take on not just our own construction projects, but also to supply the market with prestressed beams.”

In a similar way, NVC identified an opportunity to take on L-beam precasting, which the company has continued since. This, in turn, sparked growth in other areas beyond L-beams, leading to the company currently manufacture a wide range of precast elements.